by UKSEDS on 16th July 2015 in Branch Spotlight, News, Projects

On the 7th June 2015 EARS travelled to Cambridgeshire to launch a high altitude balloon (HAB). On this occasion our HAB was carrying a payload for a company called Databarracks and for the Surrey Space Center. Databarracks had requested that we fly a Microsoft Server 2003 DVD case to help them commemorate the end of support for the Microsoft product. On behalf of the Surrey Space Center we were carrying a prototype cosmic radiation sensor to allow them to carry out tests on the sensor’s performance. 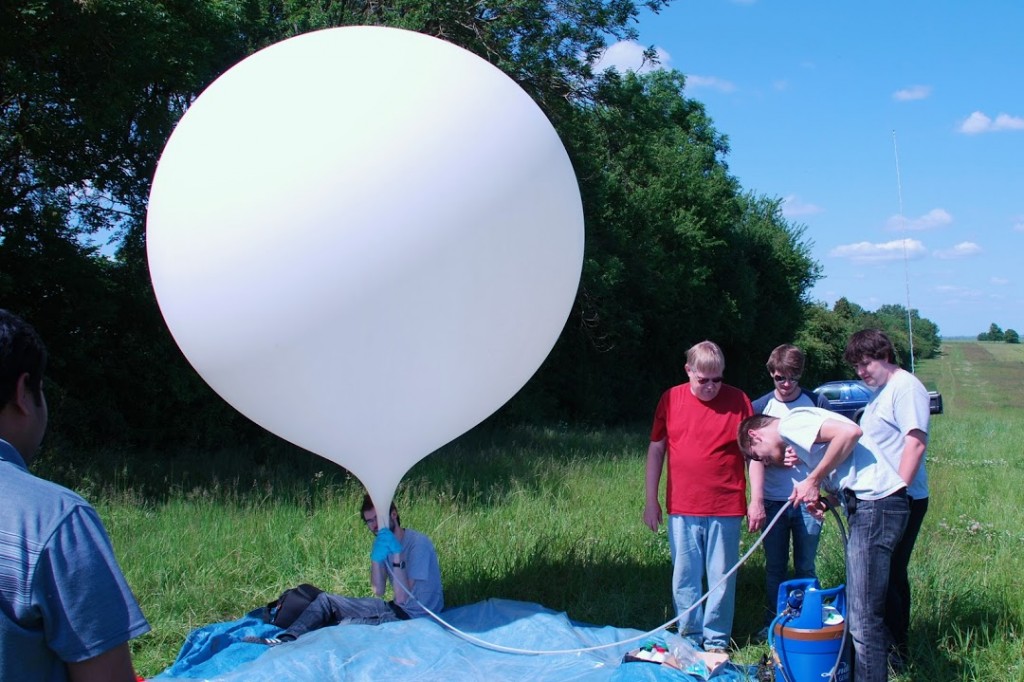 With clear sunny skies, light wind and predictions showing our most likely landing site to be just outside of Norwich we were set to prepare for launch.

After some final preparations we launched the balloon. Apart from the case and the sensor, it was also carrying three GoPro cameras, the flight computer and a smartphone, totalling 1.8kg in weight. The flight computer was meant to send out GPS coordinates by radio at 434.275MHz, allowing us to pinpoint its location with help from the community via tracker.habhub.org. Unfortunately, this system failed, so we had to rely on the smartphone–based secondary tracking system to send us its GPS coordinates via text messages. It should be noted that while we were tracking the balloon, we weren’t actually following it. We were heading towards where the balloon was expected to land, which changed when new coordinates and weather data were inputted. 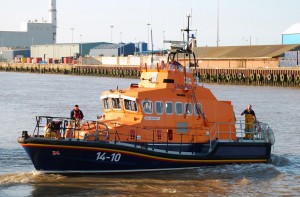 We released the balloon in Ellsworth, Cambridgeshire, expecting it to land in Norwich after around three hours of flight. Instead unexpected winds carried it 40 miles further east, where it landed 6 miles off coast in Great Yarmouth. We consulted the coast guard, hoping they could contact nearby vessels to retrieve it for us. To our surprise, they agreed to launch a training exercise involving two of Britain’s fastest lifeboats. Within nine minutes Caister Lifeboat had retrieved our payload and handed it to Great Yarmouth and Gorleston Lifeboat. The whole ‘rescue’ mission took less than thirty minutes.

Flight data shows that it reached a maximum height of 32 km and flew 50 miles. We also obtained several clips of in-flight footage as well as the DVD case in space.

I really enjoyed being part of the design team for this flight. I was brought in late to work on the flight computer software (this happened last year as well). The mission was simple: launch a DVD case to the edge of space, and grab some nice video and images.

For the flight computer, we used a simple Arduino-based board with an IMU for accelerometer and gyroscope measurements, an on-board temperature sensor and a bunch of I/O breakout pins. The board is available on the EARS Github.

The mission was ultimately a success, as the recovery of the DVD case footage as well as the launch footage meant we fulfilled the request of our client, Databarracks. However, we had several mishaps, some of them easier to predict than others. I’ll run through the biggest ones here – if you’re planning your own flight, these are some things to watch out for!

The GoPros failed on the ground in the run up to launch, and again during the flight. We were too close to launch to properly investigate the issue, so we ensured the power was on during takeoff and hoped for the best. Testing after the fact revealed we probably overheated the cameras – with internal casing temperatures at 17-25 degrees even at high altitudes, the highly insulating foam is not helpful for cameras already notorious for running hot! Though we can’t test this, we also suspect that this being the third flight for two of the cameras makes a difference to their reliability. Though designed to work in harsh environments, I think the upper atmosphere and the temperature shock that comes with a swift launch is detrimental to their operation. The trick is to find a good way to keep the cameras at a comfortable 20-30 at all stages of the flight, while still providing a good power supply that also works. The Surrey Space Centre has had success with ‘spacesuits’ – a reflective foil coating around the cameras. However, we would always suggest using an external power supply if possible.

Analysis of the data available from the (still working) flight computer once recovered suggests the GPS stopped responding close to 12km – a common restriction for these devices unless configured specifically for high altitude work. This obviously isn’t something we can test on the ground, and as the configuration code was reused from the previous flight we hadn’t anticipated any issues with the GPS. Though this is clearly impossible to test from the ground, ensure devices are not set to ‘pedestrian mode’.

As always launching something to the edge of space (even if it breaks and lands in the sea) is a fun and rewarding experience. If you’re interested in getting in to high altitude ballooning, it can be done for as little as £200 – and atmospheric or science researchers will often foot the cost if you look for the right people.