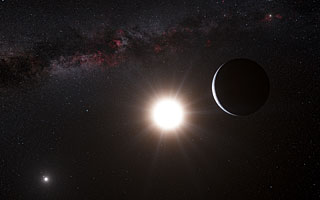 The first ever contest allowing members of the public to NameExoWorlds begins its first round, offering the registered clubs and non-profit organisations, including UKSEDS, the chance to nominate their favourite systems to take through to the next rounds.

The International Astronomical Union (IAU) is organising a worldwide contest to give popular names to selected exoplanets along with their host stars, among a list of hundreds of well-characterised exoplanets it has offered for public naming. The first round of the competition allows organisations such as UKSEDS to nominate up to 20 ExoWorlds (exoplanetary systems and their host stars) to be made available for the next stage of the contest, where names can be proposed for the most popular ExoWorlds.

Although people have been naming celestial objects for millennia, the IAU was delegated the task of assigning scientifically recognised names to newly discovered celestial bodies by its member countries. The NameExoWorlds contest is the first opportunity that the public will have to name not only exoplanets, but also, for the first time in centuries, to give popular names to stars  — those that have known exoplanets in orbit around them.

The deadline for the first stage of the contest itself is at 23:59 UTC 15 February 2015, when nominations for 20 ExoWorlds to be named will close. In the next phase, once the most popular ExoWorlds have been identified, the stars and planets will be made available to all registered clubs and organisations to submit their desired names. Each club or organisation can then propose a name for one ExoWorld, with all submissions having to abide by the IAU Exoplanet Naming Conventions and be supported by a detailed argument for their choice. When this stage has concluded, the public worldwide will then be invited to vote on their favourite proposed names.

The final results are expected to be announced at a special public ceremony held during the IAU XXIX General Assembly in Honolulu, USA, 3–14 August 2015.