by Robert Garner on 8th December 2015 in Conference, Events

The 28th Annual UKSEDS National Student Space Conference will be held on the weekend of 5 – 6 March 2015, and hosted by Sheffield SpaceSoc at the University of Sheffield. Early bird tickets are now available.

The UKSEDS National Student Space Conference is the premier event for space students, bringing together students, academics, and professionals from across the country to share knowledge of space, discuss the challenges facing the sector, and to create new links between groups. It features talks by leading space science and industry figures, a careers fair, and opportunities to take part in discussions and networking events.

The Conference is run and organised by UKSEDS, the UK’s student space society, which unites space-enthusiasts at universities across the country. A different UKSEDS branch hosts the conference each year, and next year it will be hosted by Sheffield SpaceSoc, at the University of Sheffield. UKSEDS’ founding conference was held in 1988 at the Science Museum, London, making this year’s event our 28th.

There are expected to be upwards of 300 attendees, primarily undergraduate and graduate engineers and scientists with a strong interest in the space industry who are looking to learn more about space projects and potential employers.

Special early bird rate tickets are now open on our conference minisite at ukseds.org/nssc2016 and will be available until 31 December. One-day tickets, and tickets for the evening social will become available after that point. Your ticket grants you access to the conference and includes lunch. Saturday tickets include the evening networking reception.

We also offer a number of different sponsorship packages which can be tailored to your requirements. These include having a stand in our exhibition hall, presenting a talk as part of the conference, sponsoring coffee, lunch, a networking reception, or an evening social event. If you are interested in exhibiting or sponsoring contact [email protected]. Due to the nature of some of these opportunities we are only able to offer a limited number, so please get in touch soon to avoid disappointment.

UK Students for the Exploration and Development of Space (UKSEDS) is the UK’s national student space society. It supports students and enthusiasts across the country by running space projects, hosting conferences and workshops, and doing outreach to inspire and educate. It aims to promote space development and build links between different parts of the space community.

UKSEDS, formed in 1988, is the UK chapter of SEDS, the world’s largest space enthusiast organisation for both school and university students. SEDS was founded in 1980 by students at MIT and Princeton University and now has more than 60 chapters worldwide.

UKSEDS is a charitable body, registered in England & Wales, with registration number 1158580. 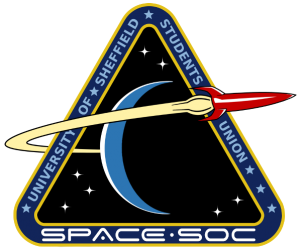 Sheffield SpaceSoc is a branch of UKSEDS, and was the winner of last year’s UKSEDS 2014 Branch of the Year award. SpaceSoc is a relatively young society that prides itself on being inviting to students from all disciplines.