by UKSEDS on 30th April 2015 in Careers, Interviews 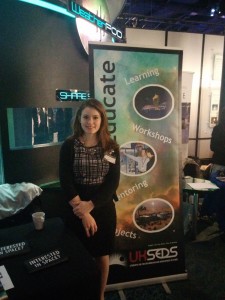 Introducing our Careers Officer, Portia Bowman. We have prepared a short interview so you know who you are talking to when you email us for careers advice! She is a recent graduate working at Thales Alenia Space –Italia as an Engineer in the Architecture and Ergonomics Department of the Space Exploration and Science Domain.

Portia is currently working on the Cygnus Pressurised Cargo Module under development by TAS-I for Orbital ATK. She studied Space Exploration Systems MSc (SEEDS stream) and Physics with Astrophysics at the University of Leicester where she was involved with the Leicester branch of SEDS – AstRoSoc. She finished her studies in 2014 and worked as an Engineer for a charity called AirDropBox before moving to Turin in February 2015.

When did you become interested in Space/the Space industry?

Space has always fascinated me, I used to spend hours staring in wonder at the stars (and being thoroughly confused as to what the hell was going on in the universe) which lead me to study Physics with Astrophysics at University to attempt to satisfy my need to find out exactly just what is going on. I had no idea what kind of job I wanted to do at the end of it, but with Physics you can still do many different kinds of jobs so I thought, why not!

In the space of a week in my final year I went from wanting to be a teacher to thinking that maybe I should have studied dentistry, to regretting not choosing to do an Engineering degree then finally to watching an episode of time team and deciding that for sure I should be an archaeologist! (Final year exams definitely make you question your life choices).

Having decided 6 months before that I didn’t want to do anything technical, I changed my mind and realized I needed a Masters. (Of course, this was after the deadline to switch from a BSc to MPhys had passed).

From day one of my Space Exploration Systems MSc I was so inspired about how cool it is that we can actually put stuff in space that I knew the space industry was for me.

Was it easy to get your job? Did you apply to loads? Were you rejected?

I applied to about 10 different companies (and several to more than one role), I was interviewed 5 times, and rejected from all but my current and previous jobs.

My experience working closely with industry experts (including future employers) to industry standard for my Masters project lead directly to my job offer. My project was a 6 month feasibility study on a manned mission to Mars with 11 other postgraduates from the University of Leicester, the Politecnico di Torino and the Institut Supérieur de l’Aéronautique et de l’Espace. We designed a 600 day mission to send 6 crew to the vicinity of Mars, which would include a manned landing on Phobos and robotic landings on the Martian surface. The project was designed to be performed as close to a real industry study as possible with a great deal of industry support so that the project could act as work experience as well as counting toward our degree.

How did you decide which aspect of the space industry to work in?

I just followed my areas of interest while I was studying, both technical(human spaceflight, systems engineering) and non-technical (organization, project management) and it lead me to have the right areas of experience suited to a role I would be interested in.

Is there anything you wished you’d learned at uni that would come in useful now?

Italian! Since I live in Italy now it would have been extremely helpful to have at least a basic understanding of the language.. but I had no idea that I would move here!

Otherwise, not really, My MSc was particularly useful in providing a grounding in Engineering, with CAD tutorials, Systems Engineering processes and a lesson in how to read Engineering drawings. This has been instrumental in allowing me to transition smoothly from being a Physicist into an Engineer!

How did being part of UKSEDS benefit your career?

I spent 3 years on the committee of the UKSEDS branch, AstRoSoc, in Leicester. I attended the Bristol conference, and speaking to the people exhibiting there really gave me the information I needed to start thinking about a career in the space industry. The teamwork, event organization and leadership skills as well as the confidence I gained have been absolutely invaluable. Being involved in the comittee has given me a great deal of skills that are completely transferable to working in the space industry! Being involved with the national UKSEDS organization has allowed me to build a wider network of contacts and to build up a far better awareness about the space industry as a whole, how different companies and organisations work with each other as well as being introduced to significant topics of interest that affect the future of space exploration.

What decisions or opportunities do you think significantly influenced the fact you got that job?

Deciding to choose the international placement during my MSc was the main factor, along with my experience on the UKSEDS committee which allowed me to successfully present myself to the relevant people in the industry that would eventually hire me.

What advice would you give to people looking for a job in your industry?

Beyond the basic requirements of having the right qualifications, work experience, extra-curricular activities and being able to demonstrate your interest in space (hint : UKSEDS!), Persistence, Networking and Confidence are all key factors that will enable you to navigate the troubled waters of searching for a job.

Persistence: The current job market means that landing your ideal graduate role straight out of uni is very unlikely to happen. Persistence is key so that you don’t get disheartened and give up. You will fill in seemingly endless application forms, the online system will break half way through, and you won’t even be sure that people are actually reading what you’ve written. Don’t give up!

Networking will allow you to make connections so that if there are any openings you will be the first to find out about them and have inside information on what they are looking for (and often they won’t advertise the role to the general public if they already have suitable candidates).

Confidence is about being able to sell yourself to the recruiter and to knowing that you are good enough to do the job you are applying to.

If you are putting the effort in, the rest is luck and being in the right place at the right time! Good luck!

← Project Dragonfly: Sail to the Stars!
Jobs with ESO →