by UKSEDS on 5th June 2016 in Branch Spotlight

“Come along there’s surely a chance for explosions, we build rockets!”

That about sums up how I was introduced to ICSEDS (read: the Imperial Space Society) during my 1st Year freshers’ fair. That line is very descriptive of what our SEDS division at Imperial College specializes in, if the random geeks running around with giant red rockets weren’t a big enough hint!

ICSEDS hosts two projects with weekly meetings dedicated to teaching rocketry. Model rocketry is where we teach everyone the basics if they’ve had no experience; carving out fins, designing the body tubes, parachute folding and running simulations. The aim is to build your own black powder-propelled rocket and be able to recover it after launch, and with the allure of shooting up things really really high (about 100 metres), it is our most popular project. It was very fun to design my own rocket as well as use actual solid fuel, making the rockets really go off with a bang!

Anyone who’s already been launching these payloads prior to college, can join the High Powered Rocket project. That has been the highlight of my second year, where I worked in a group to build an awesome 1 metre long rocket that uses an I-motor capable of taking it at least a kilometre to the air (if nothing goes wrong that is). This was where we had more freedom on the design and assembly, meaning we could bring tools like 3D printing fin cans and laser-cutting fins to bare on our sharp-looking missile. 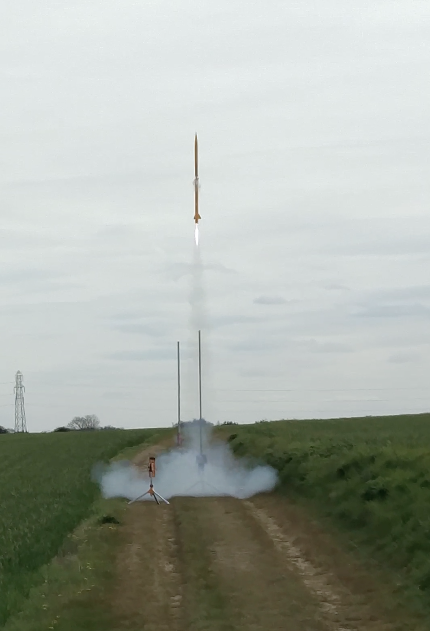 If shooting things to the sky isn’t one of your interests, ICSEDS also has a strong High Altitude Ballooning group. Ironically, this is the project that gets the closest to space; the balloon reaches up to the stratosphere, going higher than all our rockets! The project is more electronics focused, and we can receive radio communication from the balloon on the ground. It would be able to soar high enough to offer breath-taking camera views exhibiting the curvature of the Earth and a fantastic horizon!

Finally there is the Engine Design Project which has been going on for two years now. It involves designing and assembling a hybrid rocket engine from scratch and running static firing tests with the final aim of launching it on a custom built rocket. Since this requires a grasp of mechanical design, rocket engineering and electronic control, it is the most involved of our projects and is usually only open to those in the 2nd year and above.

With all the projects we have, most of the term time is spent building rockets, balloons etc., until we finally arrive at Launch Day; the biggest event for our ICSEDS members. We can’t launch our stuff in London, so we go to a field near Cambridge which hosts these launches from around the region. We successfully launched 5 model rockets (including mine) and one high-powered rocket at our last launch day, and watching them go was absolutely breath-taking! However, searching for them after they’d landed in the forest and fields wasn’t so exciting. All in all though, it was a great day to see all the rockets soaring high (and worth risking a day of revision for my exam two days later).

Overall the society seems to be getting back into good shape, but there are some improvements to focus on next year. We actually couldn’t get Launch Days for two years before this (so it was a really big deal to finally get one this year), and that is usually down to liaising with our union quick enough to reserve a driver (after deciding a date). There is an element of luck to this, and it would be better to decide launch dates as soon as possible, in summer if it can be afforded, so as to make reservations quicker. The past year has also seen an improvement in outreach events whereby we got our members to go around London (or even just Imperial) and tell kids and the public alike about space and how cool it is (because it obviously is and everyone should know that). We could do better at advertising these events to our members and get more helping hands. 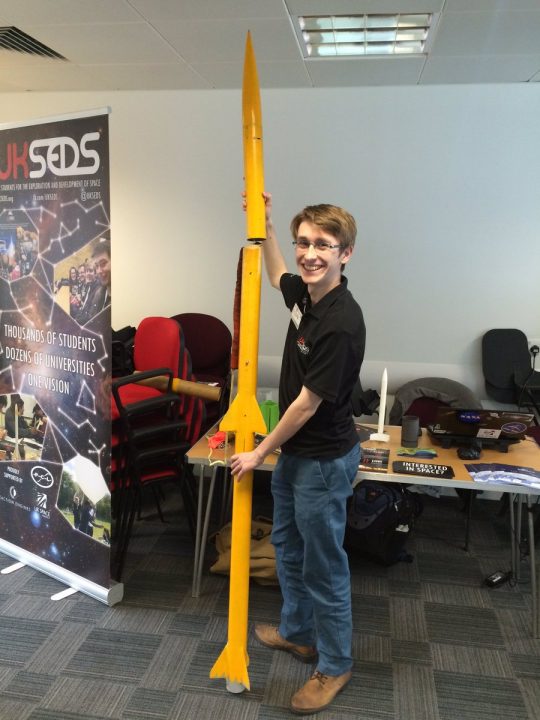 ICSEDS member and UKSEDS chair Joseph Dudley showing off a rocket at an outreach event.

Until then, we’re getting our HAB project and HPR project ready for launch because both of these were unable to make it for this year’s launch. There will also be next year’s fresher’s fair to plan out, where we can begin bringing in more diverse expertise for our projects since we need to evolve the electronics of our rocket payloads (currently the electronics involved in our rocket designs is really basic).

I’ll be helping out again for next fresher’s fair as I did for this year. After all, it says a lot about how ICSEDS has been a big part of my uni-life when this year around, the geek that was carrying the giant red rocket during the fair was me.

Thanks to Wern Ng, president of Imperial’s ICSEDS society, for this article, and good luck with your future launches!