by UKSEDS on 21st February 2015 in Ecliptic, Projects, XRT

XRT-C members were given a demonstration of a working radio telescope at the University of Exeter by lecturer and veteran radio astronomer, Dr. Chris Brunt. Throughout the demonstration, Chris stressed the importance of high quality electronics and a low noise environment for your telescope. Satisfying these two factors can make your observing time much easier. But why is this the case? In this post I’ll briefly go through this. 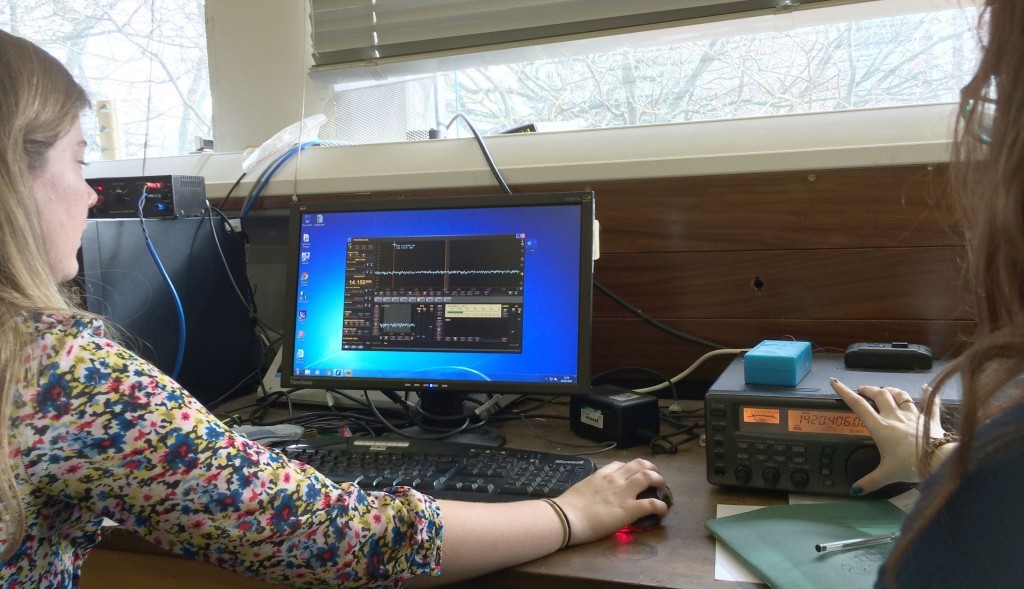 When dealing radiation in the radio wavelengths, the resulting photons are very low energy. As a result of this, radio astronomy is a continual battle to achieve a good, clean signal of the object you’re observing. The quality of a given observation can be quantified using the signal-to-noise ratio (S/N). This is essentially the strength of the signal you’re interested in observing divided by the strength of the radiation you’re not interested in; noise. This is mathematically described in The Radiometer Equation – Part 1.

Put simply, noise is any kind of signal that we’re not interested observing. Where this interference comes from is a slightly more complex question to answer. The very atmosphere around you is awash with natural radio noise. Not only that but pulsing electronics, such as vehicle ignition circuits and computers will cause interference. These unintended sources of radio noise are confounded further by the fact that humans use the radio spectrum for communications. The frequency at which neutral hydrogen is observed, 1420MHz, is cleared explicitly for radio astronomy, but it’s still possible to get interference from harmonics of other frequencies. It’s not only stray radiation that we have to contend with either.

Simply due to the ambient temperature of the electronics used for observing, there will be noise in the signal. This is due to the thermal energy in the air exciting charge carriers in the wires and circuits of our equipment. This kind of noise is evident in all observations, however because radio waves are at the low energy end of the electromagnetic spectrum the strength of the noise is almost comparable to the strength of our observation targets.

Because of all of these potential sources of interference and other assorted artifacts causing noise in our signal, it’s important to find a method to minimise this. The first consideration is the choice of location. As discussed in Homeless Science – Finding the Perfect Spot for a Radio Telescope, the ideal location for radio astronomy would be somewhere far away from electronics and in a large dip or bowl; to reduce the amount of stray radiation that may impinge on our receiver from human activities. Another important consideration for radio astronomy is choice of amplifier. An amplifier takes the incredibly weak signal that is received by the dish’s antenna and boosts it many times. Although this does indeed boost the part of the signal we’re interested in, it does also boost the background noise that we’re trying to avoid. Because of this it’s very important to get a good quality amplifier that introduces minimal noise due to the previously discussed thermal effects while it’s boosting the signal. This part really can be the death of a radio telescope project if you skimp on it. 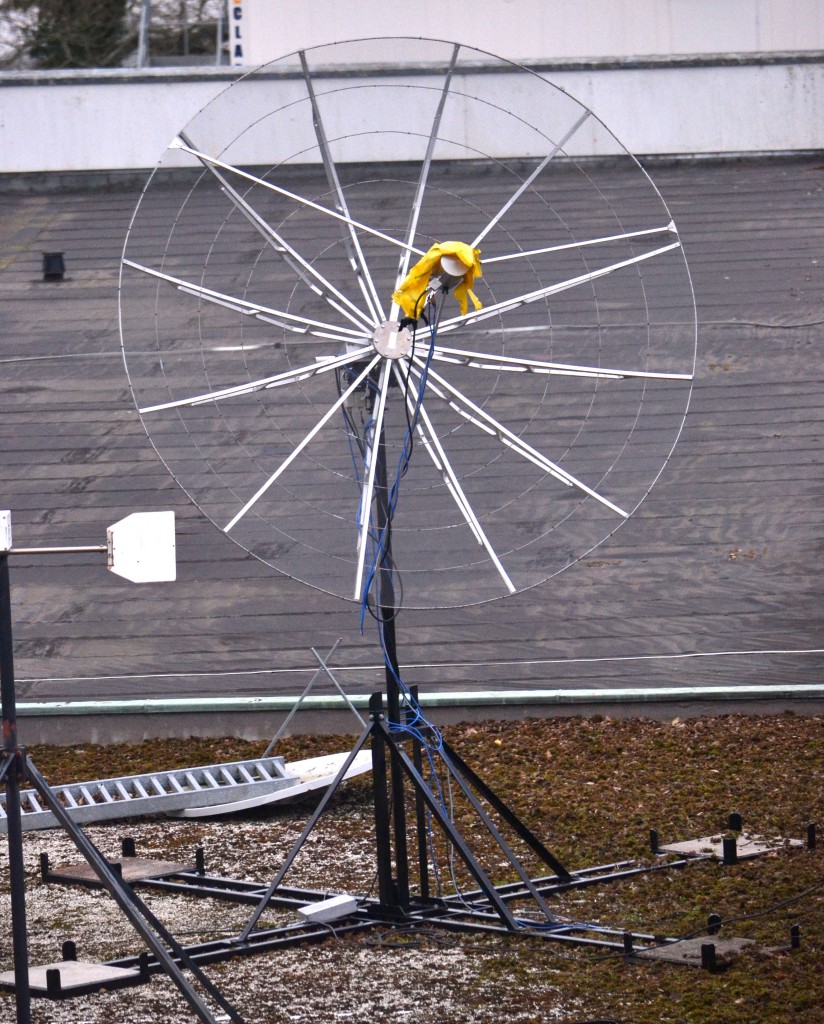 This is the radio telescope at the University of Exeter which Dr. Chris Brunt demonstrated to us.

During Chris’ demonstration, all of these effects were evident. Due to the antenna being on the roof of the physics building, there was some interference in the signal from the building. To check the strength of the signal, the beam of the telescope was moved across one of the strongest sources of radio emissions in the sky; the Sun. Moving it across rather than holding it steady is important, as it is necessary to check that the beam wasn’t observing the tower to the west of the telescope, instead of its intended target. A quick drop off of radiation while slewing the telescope shows us that we are definitely observing the Sun. Chris demonstrated how using the known azimuth and altitude of the Sun we can in effect calibrate the position of the telescope, a necessary process to ensure we are observing the correct part of the sky! While the telescope was being moved, the effect of electronics on the signal also became evident. The motors that position the dish caused massive spikes to form in the observed spectrum. Although the amplifiers weren’t working correctly at the time, a signal boost of ~x100 was still achieved; elevating the signal far enough above the noise floor to give usable observations. 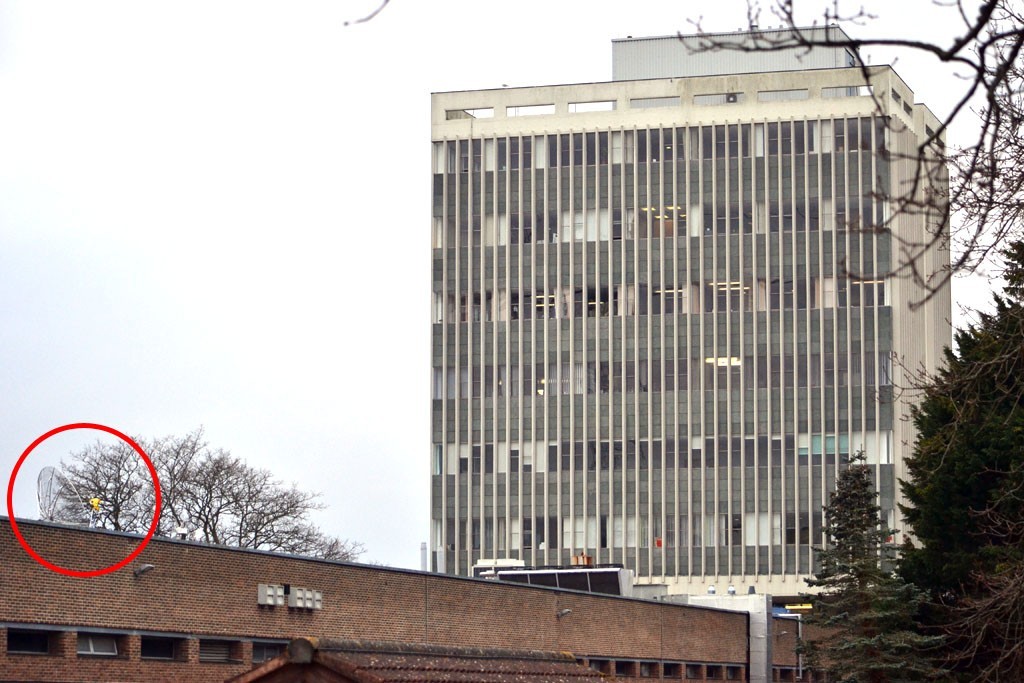 Pictured is the physics building at the University of Exeter. Highlighted inside the red circle is the dish for the radio telescope. When observing with the telescope it’s important to be wary of the position of the tower as, if the beam passes through it, the results will be affected.

This demonstration really opened our eyes to problems of operating in a high noise environment. Given our fortunate position of having our telescope deep in the Cornish countryside, we can avoid most of these sources of noise. To make the most of this excellent location, we must also ensure that we use high quality electronics to keep the S/N as low as possible.