You are invited to join the UKSEDS Asteroid Chasers team in its second year of running to participate in the International Astronomical Search Collaboration’s (IASC) bi-annual Pan-STARRS Asteroid search campaign, running from between March 10th and April 14th.

You will be participating in the discovery of new Main Belt asteroids and near-Earth objects, similar to asteroid 2012 DA14 that past us by last February. If you successfully make a discovery, this will be counted as a preliminary discovery and your findings will then be verified by an independent observer, before being passed on to the International Astronomical Union (IAU). If it indeed turns out that you have made a successful discovery then your name will forever be tied to the asteroid as one of the primary discoverers and you will even have some say towards naming the asteroid!

Through the International Astronomical Search Collaboration, UKSEDS works with the University of Hawaii to use the PS1 telescope, part of the Pan-STARRS (Panoramic Survey Telescope & Rapid Response System) array based on Haleakala, Hawaii, to search for undiscovered Main Belt asteroids and Near-Earth Objects. The PS1 1.8m telescope is able to produce images of 1.4 billion pixels spread over an area of about 40cm2. In comparison, a typical domestic digital camera contains about 5 million pixels across a chip a few millimetres across.

IASC then partitions these enormous images into 208 sub-images which are then distributed to various teams all over the globe, which is where UKSEDS comes in. Using a software package called Astrometrica (pictured) the images are analysed for any moving objects and a Minor Planet Center Report is produced and sent back to IASC for verification. If the Minor Planet Center Report is compiled quickly enough, our findings will be included in the IAU report. 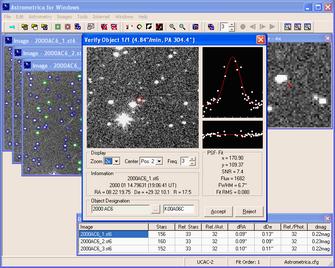 No formal background is needed, training in the use of Astrometrica will be provided before the campaign start dates.

Watch this space for news on more upcoming Asteroid search campaigns! Can’t commit to IASC’s Pan-STARRS campaign? Fear not, there are more opportunities to join in on the international effort to discover new asteroids!

For more information about the Pan-STARRS array, check out http://pan-starrs.ifa.hawaii.edu/public/

Email UKSEDS Asteroid Chasers for more information and to get involved.