by UKSEDS on 4th March 2013 in Conference, Events 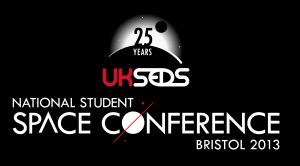 On 23rd and 24th February, space enthusiasts descended on the University of Bristol, UK for the UKSEDS National Student Space Conference 2013. For UK students, each year this is a key opportunity to meet and network with a wide range of people in the space sector from academia to industry, across multiple disciplines. It is also a great time for students from UKSEDS’ various branches to meet together in one place and discuss their activities. This year marked our 25th anniversary. 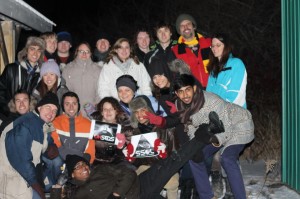 With over 200 delegates and with over 17 UKSEDS branches represented, the conference was a real sell out! On this special occasion, we were very pleased to also be joined by international representatives from SEDS-USA, CySEDS (Cyprus SEDS), EUROAVIA, DARE, Space Generation Advisory Council (SGAC) and SpaceGAMBIT.  Along with many UKSEDS alumni joining us in this celebration, this was one truly international event. 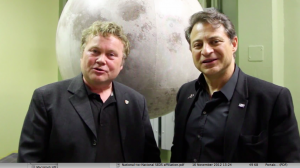 Introductory video by co-founders of SEDS and ISU, Bob Richards and Peter Diamandis

Saturday morning began with an introductory video by co-founders of SEDS and ISU, Bob Richards and Peter Diamandis. Delegates were later also reminded of the worldwide network of SEDS with a special greeting from SEDS India.

UKSEDS committee are pleased we could offer a wide variety of talks and exhibits, from space policy and law, to astronomy, aerospace and planetary science and technology. We were particularly delighted to welcome keynotes Dr Ralph Lorenz (Johns Hopkins University Applied Physics Lab, USA) and Alan Bond (Reaction Engines Ltd). It was set to be a fun-packed weekend.

We are pleased that the CEO of the UK Space Agency, Dr David Parker, along with Prof. Chris Welch (alumnus of UKSEDS) from the International Space University were able to kick-start talks for our 25th anniversary conference.

UKSEDS were very pleased to be joined by many of its alumni, some of whom spoke for us, including: Prof. Chris Welch from the International Space University (ISU); Dr Jason Hatton (ESA), the founding Vice-Chair of UKSEDS who spoke about his work on the ELIPS programme; and Dr Mark Bentley (Space Research Institute, Austrian Academy of Sciences), who talked about his work with the Rosetta spacecraft. This made our 25th anniversary conference an all-the-more special occasion. 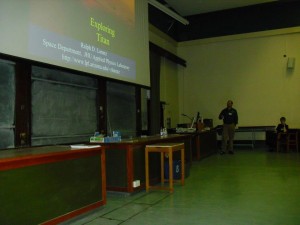 We were taken aback that Dr Ralph Lorenz could join us all the way from the USA. Dr Lorenz reviewed his involvement in the Huygens probe and talked about the ongoing discoveries about Titan’s surface and atmosphere in his talk “Exploring Titan”.

Following Dr Lorenz’s keynote, delegates were treated to a surprise video call by Italian ESA Astronaut, Paolo Nespoli, who kindly gave his time for us to recall his memories of his visit during UKSEDS’ Conference in 2000 in Manchester as well as his experiences on the International Space Station. 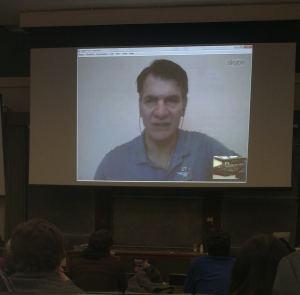 On Sunday, we were pleased to welcome Alan Bond, Founding Director and Chief Designer at Reaction Engines Ltd. Mr Bond talked about “The SKYLON Development Programme”. In his talk, he gave a summary of the ongoing development of the SABRE engine (which he invented) and the SKYLON vehicle design for which the engine is intended.

Throughout the weekend, there was a wide range of talks on offer, including talks from HE Space and Royal Aeronautical Society giving advice for budding space engineers and scientists. The conference was a great opportunity for students in particular, to mingle with the key leaders of the space industry. Delegates were able to network between breaks in the exhibition hall, which included figures such as: Astrium Ltd, Royal Astronomical Society, Royal Aeronautical Society, Rutherford Appleton Laboratory and UK Space Agency. Red Bull kindly brought along free Red Bull for delegates. 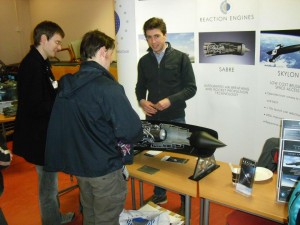 A key period of networking was the allotted wine/networking reception kindly sponsored by the Royal Astronomical Society. This included a raffle with prizes, the highlights which included a signed SKYLON model by Alan Bond; a signed copy of the book “Titan Unveiled” by keynote speaker, Dr Ralph Lorenz; and a signed copy of the book “A Down to Earth Guide to the Cosmos” by “The People’s Astronomer”, Mark Thompson. 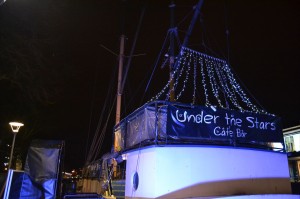 Following the reception on Saturday evening was UKSEDS’ 25th Birthday Social on a boat in Bristol Harbour, “Under The Stars”. This was another sell-out event. This included a tasty buffet menu. UKSEDS were delighted the venue management could offer us a range of “space-themed” cocktails from Laika, Sputnik, Cosmonaut (variation on Cosmopolitan), Sex Under the Stars and Pluto. To make this even more of a space party, all night we had a range of space-themed music which was selected from a number of our delegates prior to the event. Music ranged from the likes of David Bowie, Elton John, REM and The Killers to Muse and Orbital. 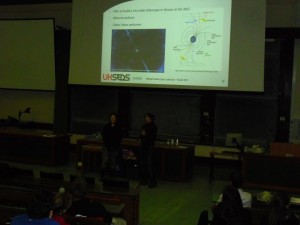 During the conference, UKSEDS was delighted to give a Project Update to its members. This included the status of REXUS: PoleCATS and StrathSEDS StrathSat-R experiment. Bristol SEDS gave updates on their Picosat and Rockoon projects. Members were also updated on the GLOBE at Night campaign to raise the public awareness of the impact of light pollution, by inviting everyone to measure their night sky brightness.  Members were also invited to take part in UKSEDS’ asteroid searches. The next PAN-STARRS campaign will run from 10th March – 14th April; a real chance to discover Main Belt asteroids as well as Near-Earth Objects such as 2012 DA14. UKSEDS also announced plans to build a 5m radio telescope at Norman Lockyer Observatory as part of a radio project. We were particularly pleased with the excitement surrounding a High Altitude Ballooning and Rocketry project. We look forward to developments over the coming year.

UKSEDS also ran an Outreach Training workshop. The hands-on session focused on teaching members how to do outreach activities with UKSEDS, identifying meteorites, craters and spacecraft materials, and constructing a DIY weather balloon. The session aimed at those who want to be a part of our outreach team and support stalls at the upcoming Big Bang Fair, Oxford Science Festival and Cheltenham Science Festival. 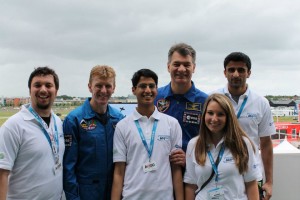 UKSEDS members with ESA astronauts Tim Peake and Paolo Nespoli at Farnborough International Airshow, one of the highlight events presented at the AGM.

UKSEDS also held its Annual General Meeting on the Sunday during the conference. Our Chair, Damian Rumble, gave an update of our activities over the past year, including Farnborough International Airshow, our joint World Space Week event with the British Interplanetary Society and the Sir Arthur Clarke Awards. This was also a chance for members to share their thoughts on the past year, provide motions and vote for the next committee. We were delighted with the turnout for the meeting and we had good competition for the roles in committee. We are excited with the selection of this coming year’s committee and look forward to the year ahead.

UKSEDS was glad it was able to subsidise a number of its members to attend from further afield such as branches in Scotland, Sheffield and Kent. We hope we can support more of our members next year. We were very pleased with the turnout across all our branches up and down the country and thank everyone for their support. We were pleasantly surprised to welcome such a large number of delegates from overseas. We hope to see a greater participation from them also, in the 2014 conference as we aim to work more closely with our international partners.

UKSEDS are delighted with the success of our 25th anniversary conference. Many thanks go to our sponsors: Astrium Ltd, the Royal Astronomical Society, Reaction Engines, SciSys, HE Space, Royal Aeronautical Society, ESERO, Serco and Avanti. Without their sponsorship this event would not have been possible. We are also thankful to the support of Bristol Alumni Foundation, University of Bristol, Bristol CHAOS, British Interplanetary Society, International Space University, Space Generation Advisory Council and EUROAVIA.

Thank you to all our delegates, sponsors and speakers for making this conference such a great event. See you in 2014!!!

Did you take any photos at our conference? Please send us your best photos to [email protected] and we can add them to our archive (with acknowledgement!)