by Robert Garner on 5th July 2018 in Competition, Press releases

Students from across the UK competed in the second UKSEDS Lunar Rover Competition at STFC’s RAL Space in Harwell on Sunday 1st July.

Seven student teams consisting of over 60 participants from across the UK reached the final stage of the Lunar Rover Competition, which saw them design, construct and test a lunar rover over a period of 9 months. The challenge is based on a potential future robotic mission to a crater on the lunar south pole, and designs had to meet a strict set of engineering and science requirements.

The rovers were put through their paces on terrain similar to that found on the Moon at the Science and Technology Facilities Council’s RAL Space robotics trials area and had to withstand the stresses and strains of launch in the RAL Space vibration test facility.

Several rovers lost wheels in their attempts and one snapped its sample collection arm in half. Those who made it to the crater made use of a variety of designs, including scoops, brushes, and belts, to collect ice samples before attempting the drive home, some making it tantalisingly close to the end before foundering. 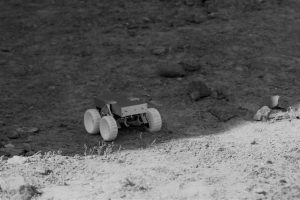 The winning rover from Imperial College emerging into the Lunar day [Credit: TAS] 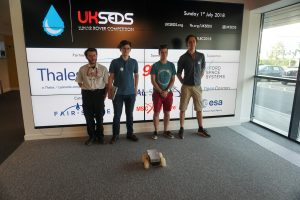 The winning team with their rover [Credit: Will Easdown]

The Imperial College London team took first place in the competition and won an additional prize for the best Critical Design Review. Morgan Nightingale, leader of the winning team said “the rover competition has been an amazing and insightful experience throughout the year! We are so thrilled to have won and look forward to improving on our design for next year.”

The University of Sheffield entry won a prize for the best innovation for their advanced scoop mechanism, used to retrieve samples of simulated lunar surface materials, and the University of Manchester’s team were rewarded for their rover-related outreach programme to encourage more young people to study science subjects at school.

Other teams came from the universities of Bath, Cranfield, Edinburgh and West of England, some of whom returned for a second year, improving their rovers from the previous year.

“Opportunities like this are critical for building the practical skills that allow students to excel in the modern workplace.”, says Robert Garner, Head of Competitions at UKSEDS, “In particular, the focus on the processes used in the space industry and engagement with our industrial partners gives a great insight into the challenges that face a new space engineer. Plus, building robots is fun!” 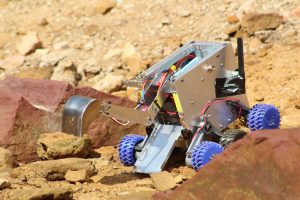 “The majority of engineering and science graduates are coming to us without a knowledge of how the space industry actually works.”, says Andrew Bacon, industrial advisor to the project from Thales Alenia Space in the UK, “so we conceived this project together with UKSEDS to give UK students a headstart and to help close the skills gap for the burgeoning UK space industry which requires over 20,000 new engineers and scientists by 2030 to remain competitive. It has been great to see how the students have stepped up to this challenge and it gives me great hope for the next generation.”

Mariella Graziano, Executive Director of Space Segment & Robotics Business Unit states “GMV is proud to participate as sponsor for the UKSEDS Lunar Rover Competition which is an exciting challenge and a great way for university students to learn about space engineering and gain invaluable practical experience in robotics engineering”

Dr Chris Mutlow, Director of RAL Space, said “It’s been a pleasure to open our facilities to students to give them a real flavour of the rigours of testing for space.  This competition provides the right skills and experiences they need to get jobs in the industry, so it’s great to see some of the innovative solutions the teams have developed and the effort they’ve put in. With the UK space sector growing at 6.5% each year we need new talent, like the competitors in the Lunar Rover Competition to come and work with us in the space industry.”

The Lunar Rover Competition is organised by UKSEDS, the UK’s student space society and its partner, Thales Alenia Space in the UK and sponsors, STFC RAL Space, GMV and FAIR-SPACE Hub. Additional support is provided by Oxford Space Systems, Open Cosmos, and the European Space Agency. Inspired by past and future missions from NASA and the European Space Agency, the competition challenges undergraduate students to solve engineering problems, using industry-standard techniques, tools and processes. More information on the competition can be found at:

UK Students for the Exploration and Development of Space (UKSEDS) is the UK’s national student space society. It supports students and enthusiasts across the country by running space projects, hosting conferences and workshops, and doing outreach to inspire and educate. It aims to promote space development and build links between different parts of the space community.

UKSEDS, formed in 1988, is the UK chapter of SEDS, the world’s largest space enthusiast organisation for both school and university students. SEDS was founded in 1980 by students at MIT and Princeton University and now has more than 60 chapters worldwide.

UKSEDS is a charitable body, registered in England & Wales, with registration number 1158580.

About Thales Alenia Space in the UK

Thales Alenia Space in the UK was established in 2014 with offices in Bristol, Harwell and Belfast and is a leader in propulsion systems, mission subsystems, and next generation payloads for telecoms, satellites and UK satellite constellations. Thales Alenia Space in the UK is also responsible for the Broadband Radiometer – a space borne instrument, as part of the European Space Agency ‘Earthcare’ programme, which will help scientists understand and monitor global warming.

RAL Space is an integral part of the Science and Technology Facilities Council’s (STFC) Rutherford Appleton Laboratory (RAL). RAL Space carries out world-class space research and technology development with involvement in over 210 space missions. RAL Space has a wealth of experience leading robotics field trials and technology development as well operating a world class set of facilities for testing space instruments and satellites.

At GMV, we put our minds and knowledge at the service of our Space customers to provide them with the best possible solutions to meet their needs. After more than 30 years working side by side with our customers, GMV has established a reputation as a reliable and proactive partner. We work closely with our customers to look for innovative solutions that not only add value, but also help our customers meet the continuous challenges that the Space Industry faces. GMV UK is geared towards the space market, with special emphasis on applications of space technologies, earth observation, telecommunications and last but not least robotics.