by UKSEDS on 21st April 2016 in Branch Spotlight

Leicester, who won the ‘UKSEDS Branch of the Year’ award this year, are one of our most active branches. Thanks to Ryan Bradley-Evans, Dan Robson and Soheb Mandhai for putting together the impressive summary below, and good luck to Leicester for all of these exciting projects! To see your branch featured on the UKSEDS website, email [email protected] – ed.

Over the past year we have been very busy from socials to research projects to rocketry. We have continued old projects and started new ones. As it stands we have three main research projects underway: Project ReMoTe, Aether Labs and Rocket science.

Aether Labs is an ongoing project conducted by team of 20 students consisting of physicists, geologists and engineers (proving the old fable wrong, it is actually possible for geologists and physicists to get along!). The main research goals are to observe and monitor the changes in the vertical profile of pollution with respect to varying weather conditions.

We are currently in the process of designing a sensor suite in order to collect the required data to achieve the above goals. The project is also focusing on creating a reusable weather balloon platform. The first launch will hopefully take place sometime this summer, with the main aim of testing the infrastructure and controlling the descent of the balloon by venting the helium in a controlled manner.

Students in the society from all years have also been involved in the UK-­wide experiment to grow and observe rocket ­lettuce plants that have spent the past 6 months on the International Space Station as seeds. The seeds were returned to Earth last month and have been distributed to schools and astronomy clubs across the country with the assistance of both the UKSA and ESA. Two sets of seeds are sown (labelled red and blue) and data about the plants’ growth will be taken over the next 35 days. At the end of the experiment, ESA will reveal which set were the ones that had been in space and which were the control to see if their time exposed to microgravity and potentially harmful radiation have affected the seeds ability to germinate and produce plants. 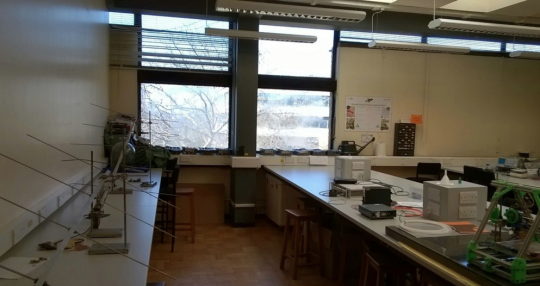 The University of Leicester has had the antennae of a long dormant radio telescope on the roof for almost two decades now, until last year when AstRoSoc decided to get it back in working order! Last year was spent checking the status of the computer and operating programmes it used (Windows Neolithic was interesting to figure out) as well as running tests to make sure the wiring was still working. This year we have taken the antennae and op­amp boxes down from the roof and begun working on cleaning and repairing them. The metal of the antennae was bent, rusted and covered in many years worth of natural “coverings” that was all cleaned by hand by our members.

The project consists of two group oriented sectors, an instrumentation group and a software group. The physical restoration of the components and antenna are handled by the instrumentation team. By conducting experiments to test each instrumental factor, the group members gain hands on skills applying their understanding theoretical understandings in a real­world problem scenario. The software group work on processing raw that is passed from the antenna, automating data collection procedures and presenting the graphical representations through the university Physics’ department intranet.

At the current stage of the project, the instrumentation team have dismantled the pre­amplifiers that modulate the data input. This is due to the substantial rusting and damage that they have undergone over the last decade. We are looking into getting these components fixed or replaced with suitable alternatives.

The software team have made considerable progress with producing meaningful graphs from sample data. The use of computational boards such as Raspberry Pis is being considered, to automate data collection and processing based on scripts written the group members. Towards the conclusion of the project, the antenna should be in a system that is able to obtain input data, process and then distribute the data to the intranet. If the project succeeds in this respect, data will also be uploaded to the AstRoSoc website.

This year model rocketry was brought back to the society in the form of small kit rockets that AstRoSoc members built and launched under beautifully clear skies with the Midlands rocketry club back in March. This was a successful day with eighteen members coming along, not only to launch their own rockets but also, to watch two M­Class launches. We were also lucky enough to have David Rudeforth From IDT Record everyone’s launches in amazing slow motion. 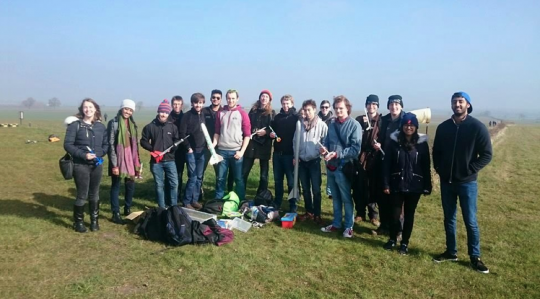 We took a group of 21 students to the NSSC this year in Sheffield where we were delighted to have one of our members, Charlotte Bouldin, win Student of the Year and the society as a whole win Branch of the Year! We’d like to thank all those committed individuals who attended our events this year and the many of them that took part in our outreach activities, our science projects and came to our social events, it is because of you that this society is flourishing and its members for next year will have a warm welcome to University life within our society. 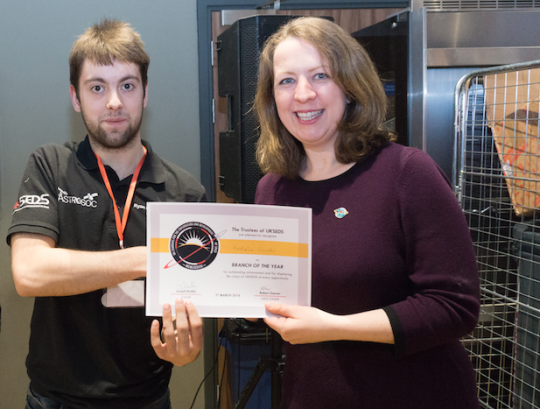