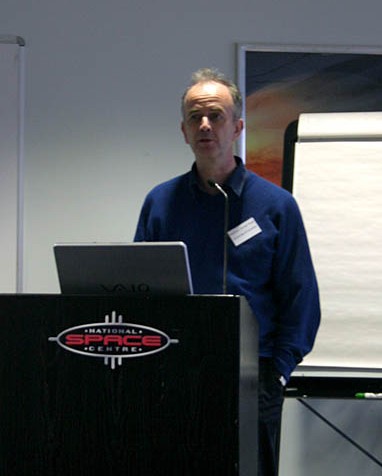 UKSEDS are very sad to learn of the passing of Prof. George Fraser, Director of the Space Research Centre, University of Leicester.

Those who attended the UKSEDS National Student Space Conference 2014 (NSSC 2014) may remember his introduction and welcome at the very start of the conference on the Saturday morning. He was, as always, in great spirits and commended how the hundreds of students were “at lectures….on a Saturday….at 9am”.

Prof. Fraser was always an inspiration to many space students, not only at Leicester but was a great influence both nationally and internationally. We wish to acknowledge his great contributions and support to UKSEDS. He spoke at our 2006 Conference then held at the National Space Centre in Leicester, and also regularly spoke at BROHP, the British Rocketry Oral History Programme, for which UKSEDS supported on a number of occasions.

Earlier this year, he won the Royal Astronomical Society (RAS) Jackson-Gwilt Medal for his over three decades of developments in X-ray astronomy. There was much still for him to look forward to, including the launch of BepiColumbo – Europe’s first mission to Mercury – for which Prof. Fraser was Principal Investigator for the Mercury Imaging X-ray Spectrometer (MIXS). His passing is an untimely one and a clear loss to space science.

A number of UKSEDS Committee also have expressed their thoughts and condolences:

“As a graduate of the University of Leicester, I remember well his style of teaching and great sense of humour. He was one of the select  “greats” who made my experience all the more enjoyable.”

“This is incredibly sad news. His anecdotes during lectures made them the most memorable of my time here. We have lost a great force for space science in the UK with his death. He will be greatly missed”

“His lectures were filled with interesting anecdotes of his experience in the space industry, which gave me a great deal of insight to how the industry works which is invaluable to a student. It is a great loss to the university, not only for students to whom he was always happy to support, but also to the space research here in Leicester.”

The space community has lost a true gem, but we take comfort that he touched the hearts of so many people and his contribution to science will always be remembered.

UKSEDS wishes to pass on our thoughts and condolences to his friends, family and colleagues at the University of Leicester at this difficult time.