by UKSEDS on 10th September 2013 in Events, International

For nine weeks our Secretary, Ryan Laird, attended the International Space University (ISU) Space Studies Programme (SSP). Ryan shares his experiences with UKSEDS and explains how YOU can get involved.

“The Space Studies Programme (SSP) is an intense nine-week course for postgraduate students and professionals of all disciplines. The curriculum covers the principal space-related fields, both non-technical and technical and ranges from policy and law, business and management and humanities to life sciences, engineering, physical sciences and space applications. The shared experience of an international, interactive working environment is an ideal networking forum leading to the creation of an extensive, international, multidisciplinary professional network.” See here for further information.

ISU and UKSEDS have a close, shared history. ISU was formed in 1987 by Peter Diamandis, Bob Richards and Todd Hawley, who in 1980 had founded SEDS in the US. UKSEDS began in 1988, when several students who had attended the very first SSP at MIT made the decision to set up the organisation in this country.

Last year ISU saw its 25th year, as we see our own 25th anniversary this year. Those who attended our 25th anniversary conference may recall we had Peter Diamandis and Bob Richards record a video for the conference which appeared to be very well received.

For a long while I had my eyes on ISU and their SSP. I was aware of ISU through my various networks among UKSEDS, Space Generation Advisory Council (SGAC) and International Year of Astronomy (IYA) 2009. I heard a lot of very positive feedback about the experience from various colleagues and friends, many whom are alumni. In February, I then heard about a new round of funding by the UK Space Agency, available for ISU and for me, this year, it sounded like the perfect time to apply.

After completing the required application in March, I waited for a couple of weeks to fund out if I had been shortlisted for interview. On 27th March, I received an e-mail from the UK Space Agency stating:

Congratulations on being shortlisted for the International Space University 2013 year entry…..

You have been invited to attend an interview at the UK Space Agency in Swindon on 17 April 2013 (time tbc) to compete for this funding.

As I was in living and working in Vienna, with plans made to travel to Berlin during that time, I couldn’t make the interview in person. I was happy I could instead have a telephone interview which took place on that date. I had mixed feelings of how the interview went and anxiously awaited for the result.

On 26th April, while meeting with my uncle in London, I received an e-mail which I had to read several times before the news sank in:

I am pleased to inform you that the ISU Funding Committee is prepared to offer you a scholarship in the amount of 16 500 Euros towards your total tuition of €17,500 for SSP13. This scholarship has been made possible thanks to the generous support provided to ISU by:

I really could not believe my eyes. Later I confirmed this and paid the remaining 1000 Euros to confirm my place. I really hadn’t expected to receive the complete package of funding. I clearly could not turn down such an amazing offer for a fantastic opportunity. And it didn’t disappoint.

Before I set off bound for Strasbourg, the UK delegation were invited to London where Inmarsat hosted a “briefing” session with the UK Space Agency. There we were able to meet some of our fellow delegates and ISU alumni. The next nine weeks looked set to be an extremely action-packed period. At that time I was sure it would prove very challenging and would be an experience like no other I had experienced. One alumnus told us:

“The next nine weeks will be some of the most intense weeks of your career so far.”

Looking back at the nine weeks that passed, I must say now this statement is very true. We learnt very quickly how ISU is often dubbed “Insufficient Sleep University”. The programme was indeed very intensive, but at that it was a lot of fun also. If you get a chance, I highly recommend you apply!

Looking back, the first week seemed to pass by the quickest. There were plenty of chances to get to know each other, despite a lot of activities including our general introductions, safety advice and orientation. On our programme we had 100 participants from 24 countries — about 25 were Chinese, 16 Canadian and third largest represented (to our delight) were 7 of us from the UK.

We were welcomed with a boat tour through the colour and beauty of Strasbourg, on our way to the European Parliament in Strasbourg. Here we had the SSP13 Opening Ceremony (broadcast LIVE on webcast, viewable here), which ended with a welcoming reception.

Later that week we heard from co-founder of ISU and SEDS, Peter Diamandis. I was pleased to address him and thank him for his inspiration, along with a personal thanks for recording the 25th anniversary video for UKSEDS (all communication was previously done via e-mail).

The core lectures soon kicked in. This consisted of 63 lectures from leading experts in their field brought to our programme from all around the world.

I was honoured to be taught by, for instance, retired astronaut, Prof. Jeff Hoffman. Hoffman flew five shuttle flights, including a repair of the Hubble Space Telescope. He told us of his experiences on the space shuttle, along with his life and work in space.

The  four weeks of lectures concluded with an assessment in the form of a 3-hour exam. Considering how packed the programme was and how intensive the lectures were, I was particularly worried about when to fit in revision time. (It should not be underestimated how difficult this can be with the numbers of core lectures from 9am, evening lectures and receptions — late nights and early starts.) It worked out well in the end but on reflection, perhaps this element of the programme was the most difficult and worrying.

Soon after our exams our department activities started. I opted for Space Applications, which for me was something . For me, this included visits to SES Satellites (Luxembourg), ESA’s European Space Operations Centre (ESOC) and EUMETSAT (Darmstadt, Germany), as well as the Black Forest in Germany and Meteo France in Strasbourg. Activities included training on GIS (Geo-Information Software). 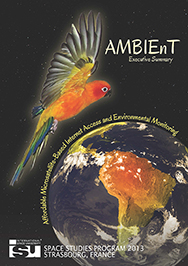 We also began our Team Project activities, which we worked towards until the end of the programme. For me, my project was AMBIEnT (Affordable Microsatellite-Based Internet and Environmental Monitoring). Key milestones included our Executive Summary, Team Report and Presentation (viewable online). This project really tested the 3Is of ISU — international, intercultural and interdisciplinary. We were a team of 33 from 19 countries, with a mix of approaches towards doing things from our different professions and cultures. At times it was testing, especially at the start. It was really up to the team to organise ourselves in a work breakdown structure and outline our mission objectives, which we summed up in our mission statement:

To offer sustainable and affordable internet access and environmental monitoring via microsatellites by 2018, as a means to provide socio-economic benefits to the Brazilian Amazon Region with a future capability for global expansion to other unconnected areas.

Throughout most of the nine weeks, we had either an evening guest lecture or participant talk, sometimes followed by a reception. We had some very special events, notably the ISU Astronaut Panel. This consisted of a panel of five astronauts from across the globe, moderated by Dr. T. Dwayne McCay – Executive Vice President and Chief Operating Officer for Florida Institute of Technology. The astronaut panel included: Jean-Jacques Favier – Former CNES Astronaut, President of Blue Planet; Chiaki Mukai – JAXA Astronaut, Director of JAXA Center for Applied Space Medicine and Human Research; Bob Thirsk – Former Canadian Astronaut, Vice-President of Canadian Institutes of Health Research; Paolo Nespoli – Italian ESA Astronaut; and Reinhold Ewald, German ESA Astronaut.

Signed autographs by all the panel of astronauts.

If that wasn’t enough, we had a rocketry competition and robotics competition, each which were very successful. Mid-way through the programme was the ISU Alumni weekend; a great chance to meet former ISU participants and get to hear of their work. This included a poster presentation, careers event and concluded with the Space Masquerade where we dressed in our space costumes (I dressed as a TARDIS).

All good things sadly come to an end. Soon the experience came to a close at a blink of an eye. The Masters students returned to present their work, as we presented ours and the programme soon drew to a close. We received our ISU pins (which only alumni receive) and later was the ISU SSP13 Closing Ceremony (broadcast LIVE and is viewable and downloadable here). We were greeted by a special closing lecture by ISU’s Chancellor, ESA’s Director General, Jean-Jacques Dordain. We were then presented our graduation certificates for completion of the programme.

Throughout most of these nine weeks it felt we were going at warp speed. There was so much packed into the programme, but it was a lot of fun and I feel I have taken a lot from it. I feel in a much stronger position in my career for this great experience and now being part of the “space mafia”. (ISU is now host to over 3700 alumni from every corner of the globe.) Now I feel this “de-orbit”, one of our lecturers Prof. Scott Madry spoke of. We now re-enter the “real world”, back to our ordinary lives. I am certain I will keep this experience to my heart throughout my intended career. I urge you, if you get a chance do apply!

Subscribe to news by the UK Space Agency here on their website and hear of the scholarships they offer.

Many thanks to the UK Space Agency and European Space Agency for their generous support for this experience. And thanks again to the International Space University for such a great programme!

← Lots of volunteering opportunities in October with UKSEDS!
Payload Opportunity On-board the DARE rocket to 50km! →