by UKSEDS on 2nd April 2013 in Events, Outreach

Over the weekend of the 22nd and 23rd of March a team of ICSEDS members joined other volunteers and professionals at the UK Space Design Competition (UKSDC) finals at Imperial College London.

The UKSDC is a weekend residential competition open to all year 10 – 13 students in the UK.  The UK finals are held at Imperial College London. Student teams are selected based either video responses to an initial request for proposals or by winning a regional competition. This year saw the students designing a lunar-orbiting port settlement for 5000 inhabitants. Four teams of 40 students each, from NUMBER different schools from across the UK,  compete to win the ‘contract’ with ‘the Foundation’. The teams have only 1 day in which to design, plan and budget a full settlement concept before presenting to the judges first thing on Sunday morning. The winning team then have to select 12 members to send on to the International Space Settlement Design Competition, held annually at NASA’s Lyndon. B, Johnson Space Center in Houston, Texas, USA.

“The International Space Settlement Design competition, established first as a US competition in 1984, aims to combine a real insight into the pressures and needs of industry, combined with a brief to capture imaginations.”

Despite the snow trying it’s best to stop the students from making it into college and the obligatory technological mishaps that come hand in hand with electronic deadlines, the final presentations and judging on Sunday went smoothly, and we soon witnessed the annual ecstatic screams of the winning team, and sadly the looks of disappointment from the rest of the students. This year’s competition saw the promotion of four ICSEDS members onto the judging panel for the competition: Joseph Dudley, Adam Braithwaite, Evan Meyrick and Zoe Versey. Vidyasagar Ananthan should also have been on the panel however was unable to attend on the Sunday. 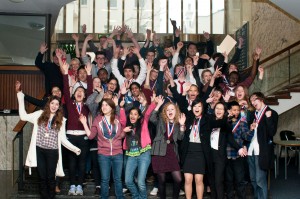 The competition is not solely aimed at getting school students interested in the space industry but calls upon and builds their skills in leadership, public speaking and management amongst others. Even students with no interest in becoming scientists or engineers find themselves gaining valuable skills for their future. This said it of course does a great job of promoting STEM subjects, I actually had the pleasure of meeting our ICSEDS Vice-Chair, also UKSEDS membership officer (previously PR officer), Joseph Dudley, while he was in his second year as a competitor in the UKSDC, and he is now studying Aeronautical Engineering at Imperial.

ICSEDS members have been involved with the UK finals since 2011. The next year saw many more current ICSEDS members sign up and this year was our biggest involvement yet, with ICSEDS members Joseph Dudley, Vidyasagar Ananthan, Evan Meyrick and Adam Braithwaite also being involved in running and judging the regional competition in Cardiff. 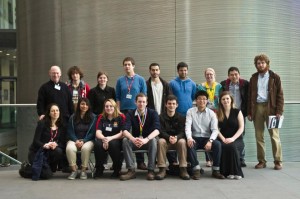 I’d like to thank all the ICSEDS volunteers who attended for committing their time and energy to the project.

Special thanks go out to Dr Randall Perry, founder and chair of the UKSDC, for inviting new ICSEDS members into his team of volunteers, Anita Gale, co-founder of the International Space Settlement Design competition, for developing the international competition and her wonderful stories about working at NASA, Allison Hearn for her enthusiasm on further collaboration between UKSDC and IC/UKSEDS, and the rest of the organising team for their brilliant work.

More information on the competition can be found on the UKSDC website – www.uksdc.org

The UKSDC is supported by: The Space, Science and Engineering Foundation; Imperial College London; The UK Space Agency;  The Impacts and Astromaterials Research Center and The Astrobiology Society of Britain.

Here’s a short documentary video on the competition:

One Response to “ICSEDS Outreach – The UK Space Design Competition 2013”