by Robert Garner on 19th July 2017 in Competition

The first UKSEDS Lunar Rover Competition was held on Sunday, 16th July at STFC RAL Space. 5 teams from across the UK reached the final stage after undergoing a PDR (Preliminary Design Review) and CDR (Critical Design Review) by a panel of space industry experts from Thales Alenia Space in the UK, RAL Space and Oxford Space Systems. Completion of the review unlocked funding from Thales Alenia Space to help teams build their rovers.

The winners were Surrey EARS with their Rover, completing both test runs as well as surviving a Falcon 9 launch on the vibration test bed. 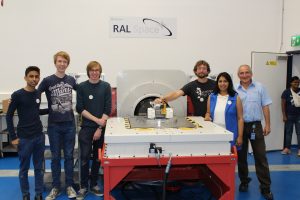 Winning Surrey EARS team with their Rover on the vibration testbed

An additional prize was awarded to the CranSEDS for the best Critical Design Review of the competition. 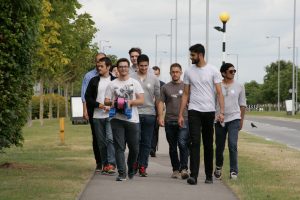 Honourable mentions go to Bath SpaceSoc, BristolSEDS and ManSEDS for taking part in this first competition. To get to this stage, the teams had to pass a comprehensive review process managed by space industry engineers from Thales Alenia Space in the UK, the Science and Technology Facilities Council’s RAL Space facility and Oxford Space Systems. Completion of the review unlocked funding to help teams build their rovers.

The challenge is based upon a potential future robotic mission to a crater on the Lunar south pole. As part of the mission, each Lunar rover was required to drive through rough terrain to the bottom of the crater to collect ice samples. Like the real mission, the student’s rovers needed to be remotely operated via cameras in order to navigate rocks, steep slopes and designed to survive the rigorous shaking of a simulated rocket launch.

Sunday’s trials in the ‘robotic trails area’ at STFC’s RAL Space facility in Harwell, Oxfordshire, simulated the real mission, with student’s rovers remotely operated via cameras in order to navigate rocks and steep slopes to successfully reach the crater site and return with a sample. Several lost wheels in their attempts and one rover was flipped onto its back when ascending a hill. Those who made it to the crater made use of a variety of different scoop designs to collect dry ice samples and attempt the drive home, some making it tantalisingly close to the end before foundering.

Here are a few actions shots of Rovers in action.

The Lunar Rover Competition is organised by UKSEDS, the UK’s student space society and its partner, Thales Alenia Space in the UK and sponsors, STFC’s RAL Space, Oxford Space Systems and Airbus Defence and Space UK. Inspired by past and future missions from NASA and the European Space Agency, the competition challenges undergraduate students to solve engineering problems, using industry-standard techniques, tools and processes. More information on the competition can be found at: