by UKSEDS on 8th March 2016 in Uncategorized

Today is International Women’s Day, and we’d like to celebrate wonderful women with a connection to space. Every person on this page is inspiring, and it’s so important that women in space are celebrated and these stories shared, because young girls need to know that STEM is a career path that’s not just for boys, and that they are vital to the future of the Space industry. 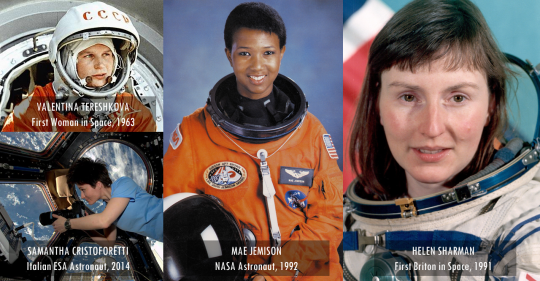 Firstly, let’s celebrate women who have been to space:

Valentina Tereshkova became the first woman in space when she piloted the Vostok 6 on 16th June 1963. More recently, she’s offered to go on a one-way trip to Mars if the opportunity arose. She also celebrated her birthday last Sunday, 6th March – so Happy Birthday Valentina!

Helen Sharman was the first Brit in space, back in 1991, before most current students were even born! The Naked Scientist interviewed her back in October.

Samantha Cristofforetti is an Italian astronaut, who holds the record for longest uninterrupted spaceflight for a European astronaut. She’s very active on twitter, although often in Italian – https://twitter.com/AstroSamantha…

Mae Jemison is a NASA astronaut, who went to space aboard the Space Shuttle Endeavour in 1992. To see her in action, watch her inspiring TED talk about arts & science education. 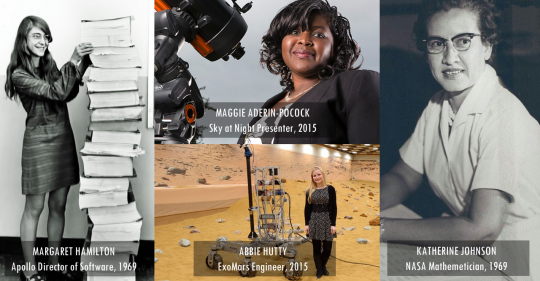 Next, we celebrate some scientists and engineers, who work in the Space industry. Just a few inspiring examples are:

Margaret Hamilton, who wrote significant chunks of the code that got Armstrong to the moon

Katherine Johnson, who calculated the trajectory for the first trip to the moon (and was so great at trajectories that even after computers were introduced, NASA still double-checked their paths with her!) 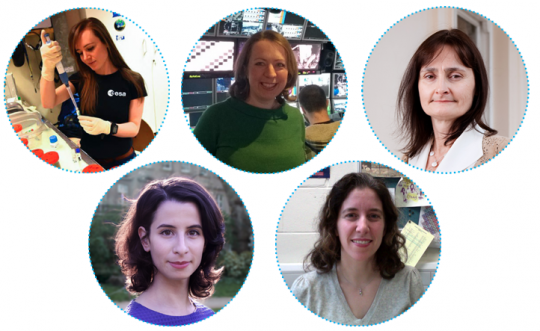 Finally, we’d like to thank some of the women who have inspired us this weekend at the National Student Space Conference. From left to right, the image shows:

Dr Beth Healey, a medical doctor who went to Antarctica with ESA.

Dr Clara Souza-Silva, who runs the EduTwinkle outreach mission and works as a molecular astrophysicist at UCL.

Libby Jackson, who is Tim Peake’s outreach coordinator and a former UKSEDS chair.

Dr Meghan Gray, an Associate Professor at Nottingham who studies ‘galaxy ecology’ using observations from telescopes around the world.

Prof. Michele Dougherty, who is PI for the magnetometer instruments on Cassini/Huygens and JUICE.

Thank-you so much for making our conference great – the committee all agreed over the weekend that when we grow up we want to be as awesome as you are.