UKSEDS members come from and reach out all over the globe! We’re proud to share the latest success story from Angaraj Duara, an international student at the University of Leicester, and active member of Leicester AstRoSoc. We hope you’ll find it as inspirational as we did.

“I joined the University of Leicester last year as a foundation year student for Astrophysics. I was introduced to UKSEDS through my local branch, Leicester AstRoSoc (Astronomy and Rocketry Society).

After the completion of my foundation year, during my summer holidays, I went back home to Assam, India on vacation. I was born and brought up in Assam and knew the amount of enthusiasm among students in Assam for Space. Hence I decided to take the initiative to open a few branches of SEDS in Assam, India. I called up Ryan Laird of UKSEDS and asked him if he could help me. I was extremely grateful for Ryan’s response, as he connected me with the President of India-SEDS and asked them to help me in whichever way they could. I sent a list of 9 best colleges and schools in Assam to Kumar Swaminathan, President of SEDS-India, who responded immediately and sent me reference letters for the schools, saying- “Angaraj Duara, member of UKSEDS would like to talk to the students of your school on Space Exploration and SEDS.”

The first school I went to was Army Public School, Guwahati, Assam. I gave a talk about space exploration, showing them images of various photographs taken by the Hubble Space Telescope, what SEDS is and what they have done so far,including the great opportunities available through SEDS, and included a Q&A session for the students. I was absolutely amazed by their responses. There were a total of around 120 students in the talk and all the 120 students enrolled their names for SEDS and they wanted to open a branch as soon as possible so I helped them form a committee. 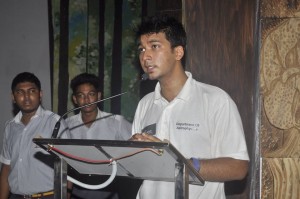 I then visited 8 more schools and colleges (including IIT Guwahati, which is one of the top known Universities in India) and was thrilled to get a similar response from all 8. They have now all opened their own branches of SEDS and a total of more than 700 new members have enrolled.

After forming these branches I decided to hold a directors meet where all committee members from these newly formed SEDS branches could get together for the first time. It was hosted by RSET (Royal School of Engineering and Technology), Guwahati. We had a discussion on what the first event should be. I suggested to organize a Hubble Space Telescope Model making competition and the committees approved it. Since my return to the UK, the committee members of Royal School of Engineering and Technology have successfully organized the Hubble Space Telescope model making competition, in which 5 of the newly formed branches and Astrophysicists from various Universities participated. Thanks to Kailash Gogoi, the president of RSET-SEDS, the event was a great success. They have now decided to have their next event in January 2014.

UKSEDS would like to wish good luck to all the new branches and extend a special thanks to Angaraj for all his hard work in promoting SEDS!