by UKSEDS on 1st October 2015 in Uncategorized

I met Jennifer on a quiet Friday morning at Birkbeck College, London. She had just submitted her PhD Thesis few days earlier, and she kindly agreed to talk to us about her project and her career.

When we met, she enthusiastically started describing her PhD project: “ It took me almost two years to decide the appropriate title, which is ‘Visible and Near Infrared Imaging Spectroscopy for Small Scale Hydrothermal and Hydrated Environments on Earth and Mars’. As the title states, it’s about imaging spectroscopy and it encompassed the testing of existing instruments and of instruments currently in development. Of particular interest is how datasets with different spatial and spectral resolutions can be integrated. Specifically, I worked on the CRISM instrument, on board Mars Reconnaissance Orbiter, and on PanCam, which will be on board the future ESA’s ExoMars rover.” [ed: the lead builder of the ExoMars rover is the British division of Airbus Defence and Space] 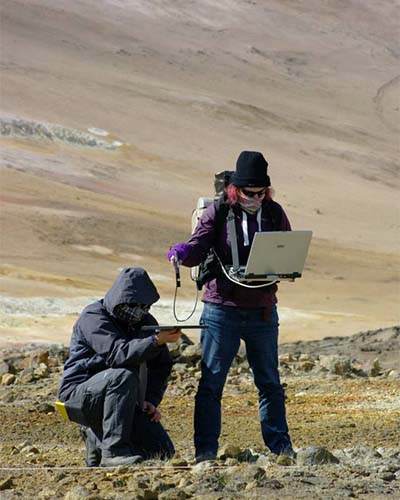 GM: What is it like to collaborate in developing an instrument that will be on a rover on Mars?

JH: Well, most of time I was just simply focused on solving problems, dealing with spreadsheets and fighting with computer codes. It’s only when talking with someone else I realize it’s actually really cool what I’m working on, helping to develop the instrument that will provide new data about another planet. PanCam is a multispectral camera, consisting of 12 narrowband filters between 400 – 1000 ?m, and will provide interesting mineralogical data of ancient hydrothermal environments on Mars.

GM: What is the part of your job that you love the most?

JH: Looking at stuff other people never looked at and try to find an answer. A PhD might not be the easiest path but doing research is awesome and it can be very fulfilling. Working on PanCam, I participated to field test in Wales and Iceland and the results obtained have been published this year. It’s very satisfying!

GM: Was doing research what you always wanted to do?

JH: I never thought that I could have had a career in space even though I could say I have been always interested in space: Scottish winter dark skies can help a lot in forging such an interest at young ages! I got a BSc in Astrophysics and a MSc in Geoscience and Remote Sensing at the University of Edinburgh, with a final project involving characterization of desert rocks, which can be used as analogues for other planets. However, it was only after I did a couple of work experience projects (as a wind energy consulting and member of the Science Promoting Group of Edinburgh) that I decided that I want to do research!

GM: What advice would you give to people who want to pursue a career as a researcher?

JH: Be sure it’s what you want to do because, as I said, can be tough. I had work experience in between my degrees and, somehow, they helped me understanding what I really want to do. At the same time, I’ve gained skills that I’ve found useful later on. So I would say to keep track of transferable skills, computer languages for instance, and try not to rule out other opportunities.

GM: Public opinion can sometimes be opposed to space exploration, considering it a waste of money that could be spent otherwise. What would you reply?
JH: Besides the purely intellectual strand of advancing human knowledge and becoming more aware of the world we live in, which is not only our planet but the entire space, I like citing Neil deGrasse Tyson: ‘All the money we spend are spent on Earth’. First of all, space exploration is a sector that potentially can provide many job places. Secondly, from a practical point of view, science and technology breakthroughs have been made over the years thanks to research in space and some of them can be of extreme utility here on Earth, such as medical advances from studies carried out on the International Space Station. The scientific world is made of accidental discoveries, such as Teflon, so we never know what we could stumble on tomorrow.