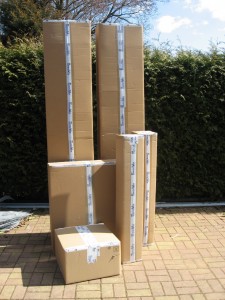 Lots and lots of boxes

Over the past couple of months, there have been lots of exciting developments in the XRT-C project. We’ve been busy ordering components and planning foundation digging trips, and very nearly have all the pieces we need to put together a radio telescope.

The first thing to arrive was the dish, ordered from RF Hamdesign in the Netherlands. With an assembled dish size of 4.5m, this meant lots of large boxes and the team headed to the Caradon Observatory, where the telescope will be built, to have a look at the pieces.

The kit nominally included the following: 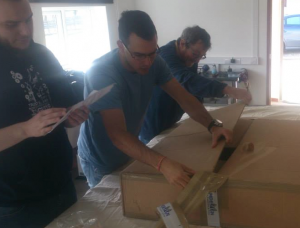 The mesh will be cut into shape and affixed to the ribs. These will then be assembled, and then lifted onto the base and stand – a feat which will probably require a crane.
The next set of components to arrive was the support and motor – also ordered from RF Hamdesign, to ensure compatability. Finally, the Receiver turned up: we’ve decided to use the SpectraCyber 1420 MHz Hydrogen Line Spectrometer Receiver. For the moment we’ll be setting this up in the Exeter physics department, so the Science team can get to grips with the setup, and we’ll move it down to Caradon once the telescope is built!

We’ve also bought a PC and will be working on setting up the receiver software. 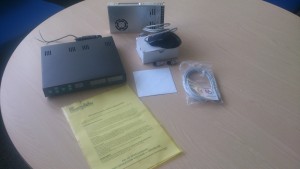 All that’s left is to complete the designs for the stand, figure out how we’re going to dig the foundations, and get assembling! The team are naturally incredibly excited that we’re near to completing the telescope; watch this space for more reports on our progress, we’re hoping for first light to be summer 2015.

You can read more about the project on our website.